We are happy to announce that the new digital album "Star Traveler" is now officially out. These 11 new songs were written and recorded by Nashota.

All music and data has been delivered to our partner in the U.S. and is now available on platforms such as Deezer, iTunes, Spotify, Google Music, ... and many more (some depending on your region).

You will be able to listen to the songs on streaming platforms, and/or purchase them for listening offline on your favorite device.

Hope y'all like the songs and have fun listening. 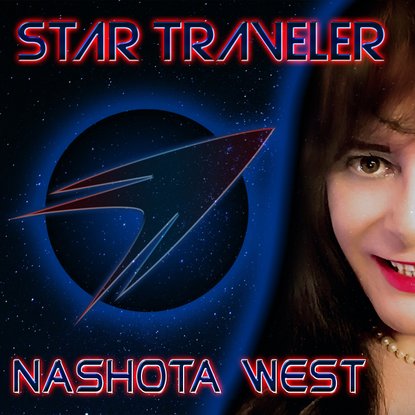 GO TO OUR CHANNEL

Nashota is first of all a vocalist and plays several instruments. In a former life she already accomplished 2 top 10 hits, with performances on TV and radio, and traveled a great part of Europe with several different acts and music styles, including the 90’s dance act “TIMESHIFT”.

She writes and records her own songs. But, just like a box of chocolates, you never know what you’re gonna get. Songs can get serious, sarcastic, romantic, funny, whatever, … or a mix of it all.

All songs are written, composed, arranged, played, sung, recorded, produced, and mixed by Nashota. She also creates songs for other artists, sometimes under aliases.
The last four years recordings and releases have moved from physical releases to digital. As it seems these days, people prefer to go digital, although there are those who still prefer physical copies. Who knows, maybe we'll put all digital releases on a CD one day ...

"Y'all should already know I wasn't born the person I am today. Yes, yours truly is what is commonly known these days as a trans woman. I found out late in my life I was a chimera (an intersex condition), by inheriting DNA material (and more) from my unborn twin sister. So I transitioned. And finally started living without any pain, after so many years. Happy at last.
My name is native American, and was given to me officially by a tribe elder and Chief, in 2016. Nashota means "Twin". The name was chosen because the Chief firmly believes that my unborn twin sister (who died in the womb) lives on through (and within) me.
In my lyrics you'll find a lot of my thoughts on this subject, but also many other thoughts and feelings. I have an open mind, analytic, and I'm also a philosopher. I stand by many native American indian beliefs, an see much of what goes on in this world. Much isn't pretty. I sometimes wonder if I originate from this planet, when I see so much foolishness, hate, pain, war, hurting, ... Fortunately I also see that humans are capable of love and wisdom. They need their eyes opened. I try to contribute by writing certain songs. I hope you'll like my lyrics, and understand the meaning behind them". ~ Nashota

For the moment, Nashota isn't available for live performances, due to safety measures concerning the virus outbreak.

However, she can still write songs for artists that would like this, and she will regularly release new songs herself.

We wish you all a safe and healthy journey, and hopefully there'll come a time when we may meet in person once again.

Live long and prosper, and